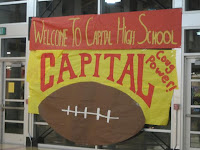 Update 9/22: The Olympian was there, too. As were some of the folks over at OlyBlog.

Update: This is getting long. Click the title or the timestamp to see the whole thing. Also, here's a link to the opposition's Talking Points.

6:23
I have wireless, outlet power, a commanding view, and infinite patience. Welcome to the Brian Baird CHS Town Hall liveblog.

After watching the video of the last Baird meetup in Vancouver, I'm wondering exactly how much animus he'll receive in the hotbed of antiwar sentiment that calls itself Olympia. My prediction: less time for open mike.

So far, the crowd inside is small and aged and subdued.

6:37
Staffer Kelly approaches to make sure I'm not going to trip any elderly folks with my power cord. How did she know?

The Vancouver debacle lasted 4 hours, she said. I think my battery could last that long.

(Passing by, Baird steps effortlessly over the cord.) 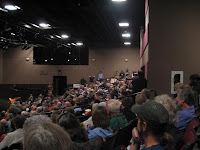 6:43
Starting to fill up. Just heard that TVW's going to be broadcasting the Town Hall. Haven't yet seen Emmett O'Connell--but then, I haven't heard the flurry of trumpets either.

6:56
Emmett is going to point out the movers and / or shakers. Toni Bailey photographs for The Olympian. "Really nice." Terence Knight of the Sitting Duck, one of our best local alt papers. Walt Bowen, former ThurCo Dem chair. John Cusick, the current chair. Baird himself. (I knew the last one.)

6:59
"Bring them home!" The chant begins and lasts about twenty seconds, scattered throughout the crowd.

7:02
Baird begins, remarking that this is around his 280th Town Hall. Microphones are set up on either side for questions and comments. Let's not all shout down me, please.

Starts with education, a "non-Iraq" issue. Regarding Iraq: "Seems to be misunderstanding about that"--"No, we get it," says a wag.

7:06
Applause line: career and technical education should be prioritized as much as college education.

Health care: has introduced a bill asking for a Congressional health care plan for all Americans. "Bicameral, bipartisan support." Supported by some unions and employers. General applause.

7:09
The Iraq discussion begins. Baird talks about his pre-war opposition, his anti-war cred. All in all, the Bush administration's handling of the immediate post-war situation: "A huge mistake. But what do you do?"

The crowd is generally respectful as Baird explains himself. Protesters are still filtering in. One holds aloft a sign reading "END THE KILLING." Another, dressed like a troll, which I guess means Death, holds another reading "Thanks for making my job easier." 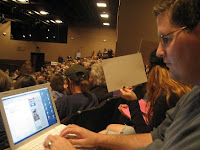 7:19
As Baird continues talking about the complexities and potential pitfalls of pulling out too soon, Emmett O'Connell, seen at right, steals my laptop to link from WashBlog to this site. Thanks, Emmett.

7:24
As Baird continues describing "the conditions that our actions created in the country," a few start calling out "lies." Others shush them. "Don't shush us," they say. Then don't interrupt.

Baird says that we have seen success in Iraq. "I believe that if we pull out now we would lose that success." A young woman shouts, "We've heard all this before."

7:26
Baird wraps up, to polite applause, mostly, with a few jeers and one ape-like cackle.

7:27
Shariya (sp), the first commenter, talks about the growing problems of poverty and homelessness. Links to increase in military spending. "You're absolutely right," Baird says. "So end the war," a few in the crowd shout.

7:30
Henry Lamb, a "Korean-era veteran." Complaints about the VA mess. The same fundamental concern: the war is distracting us, destroying our VA system. The last call: "Impeach Bush!" That gets the crowd whoopin' and a-hollerin'. "Impeach Baird," shouts another wag.

Baird remarks that Democrats are fighting for veterans.

7:37
TJ Johnson, City Council. "People are asking us to take action, because you're not." As Johnson notes an irony--having this meeting on a day of peace--"I'm not defending the war of occupation," says Baird. "Yes you are!" shouts the crowd. Johnson leads up to a question: what is your definition of success?" (There's a lot more, but that's the gist. Johnson gets interrupted by someone with less patience than I.) "You no longer deserve the privilege of representing this country," Johnson says, and the crowd erupts in applause and shouting.

7:40
Baird responds coolly, though the color in his cheeks is rising. This is a hostile crowd, prepped to be hostile. "Where do we go now?" Every time he raises this question, the response is immediate and strident: "Bring them home!"

Baird notes an uncomfortable irony: "I see certainty on either side. It was certainty that got us into this mess."

The sporadic interruptions are shushed or applauded depending on--I can't quite figure out what. A strange brew of civility and raucous populism. This is democracy, I suppose. 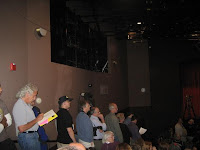 Baird notes the lack of training, lack of equipment of the Iraqi forces; "They need some more time.... I think this if frankly, TJ, our last chance.... Success is a civil Iraq, relatively free of Iran. I don't support permanent bases there."

7:45
This crowd is ready to jump on any little thing: Baird says, along with conservative estimates, that 100,000 have died, and over 2 million have been displaced. The crowd shouts, "Millions!" Baird tries to give himself credit for coming here, and the shouts come again: "That's your job!"

Baird includes blogs in his list of untrustworthy media.

7:48
"You're very lucky and you're smug," says a commentator, "because we loathe the Republicans and have to vote for Democrats."

To a "corporatocracy" complaint that invokes Jon Stewart, Baird offers his support for a War Profiteering Act.

8:00
After a labored speech by a commentator about "pulling out" of a "hopeless" situation, Baird responds, "You have every reason to be skeptical," and attempts to point to successes in training US troops in Arabic, working with locals.

8:04
This is turning into a staff meeting. When no one provides time signals, you get an inequitable distribution of vocal resources. ("A staff meeting?" Emmett says. "Must be a teacher thing.")

8:09
A complaint about Big Oil. Baird doesn't like the original agreement, which didn't do enough to share the wealth with ordinary Iraqis. Progress is "frustratingly, agonizingly slow"--and won't be helped by the refugee crisis. Seeing progress in "venture capitalism" efforts.

8:12
Someone who "worked at the CIA and studied under Scoop Jackson" says that war is inherently evil, and that the occupation is sowing seeds of fascism in America. Another call for impeachment, to general tumult.

8:14
Green Party advocate says that the two major parties are both to blame. Brings up the Greenspan memoir: it's about oil. Starts citing from Baird's website, making it sound like Baird considers oil a "vital interest" in the region. Baird responds to his question, "What's our vital interest?" by asking, "If we left tomorrow, what do you think will happen?"

The Green Party guy says he has "intuitive faith" that Iraqis will "straighten things out" themselves. And you wonder why these guys never win elections.

8:20
Baird, despite interruptions, answers the question: our "vital interest" is our international reputation. We have an obligation to help fix the problem we created.

Growing frustrated with the chronic jumping-in, Baird fires back at a young man who mocks an Iraqi's anecdote: "These are people who have skin in the game. They are not in bloody Olympia Washington."

8:26
A "lifelong Democrat" accuses Baird of abandoning the Democrats, by arming the Bush administration with rhetoric and imagery of an "independent Democrat," backstabbing MoveOn and Nancy Pelosi.

Before Baird can launch into his plea for reasonableness and open-mindedness, the man walks away. Baird calls him back. "I don't want a response," says Cranky Dem. "I just came here to tell you to go to hell."

8:32
I see some folks trickling out. I think I can last another 28 or so minutes.

8:34
Finally, a clear, easy question: how long should we stay? Problem is, there's no clear, easy answer. Baird isn't Bush. He has this thing called nuance.

When Baird raises the specter of a nuclear Iran, the crowd responds with predictable skepticism. "What about our nukes?" one lefty asks.

8:39
Baird asks for one more question.

"You don't carry the sins of your government in your soul," says our resident Tim O'Brien.

8:50
One gentleman asks the audience to raise their hands if they want to see the troops come home. Everyone raises their hand. "Anyone who feels the other way?" The Death Troll stands up and waves. He was waiting all night for that chance.

8:58
I'm mentally packing it in. I'll recap and add some photos in a little while. Emmett will stick it out for me, right, Emmett?
posted by Jim Anderson at 6:24 PM

Nice write-up, Jim, and thanks for being there.

There was an opinion piece in the Spokesman-Review yesterday praising Baird for his "courage." I have a hard time praising calling it courage when he's willing to let our kids die to make someone else's life better.

Yeah, I'm in the bring-em-home camp.

Good Lord, have you switched to a Mac?

Thanks, Ryan. It was an exhausting night--others stayed for another two hours after I left, awaiting their turn.

Thanks for the account -- very descriptive on the audience reactions.

When I read Baird's comment on "certainty" I flashed on this article by Switzerblog:

The Trouble with Moral Clarity.

The anger at Rep. Baird is understandable; I feel it too. But they've all failed us -- Baird less than some. Baird's real failure, I believe, is not in this about-face he's done -- but because he's not talking about the real issues. None of the electeds are.

It's like we have this long road to walk -- and we haven't even found the road yet.

The issue as defined here -- keeping the troops there or bringing them home -- is just one piece of it.

I don't see how we're going to have anything but continuing catastrophe and heartbreak -- and long-term damage to our own national stability -- unless we get everyone out of there -- not just the soldiers but the mercenaries & profiteers and all forms of control over their resources and governance. We've got to face up to the lies, sort out our own troubled house, and make restitution to the Iraqi people however possible. It starts with impeachment. Something our electeds won't even talk about. Or the candidates.

Well, I stuck it out until about 9:30 or so. It seemed like a lot of "public comment" sessions I've been to. A lot of speeches disguised as comments. Little Kennedies everywhere.

There was also a eventual breakdown of decorum which got me down. I tried to stick it out (apparently it went until 11p), but with that empty seat to the left of me, it made it pretty easy to get out.

Great live blogging on the night, it sounds like it was very interesting. I don't know if it is just the location, but would you say that most people in the audience weren't really there to listen to his reasoning for supporing the escalation?

Baird also had one in Raymond:

I still am mulling it over, trying to come up with a suitable recap.

I don't know if I'd say "most" weren't willing to listen--tough to read minds. But the loudest and the longest-staying, for certain. No surprise, really: Baird's supporters just don't have the same feelings of betrayal and a fervent anti-war agenda. The event--especially since certain groups came prepared with talking points--was set up to favor the opposition, at least once the mikes were opened.

© 2004-present. This blog is the intellectual property of Jim Anderson. Jim's opinions are his and his alone. Comments are the sole responsibility of those who post them, and are rarely deleted without explanation, except for malicious abuse, spam, or advertising, which are deleted immediately. Donations are encouraged, as they tend to result in better-quality blogging.

"Our only hope for salvation on the Web."
--Cameron Seib